A lot of you probably already know how crazy cool Julie Murphy is, which is exactly why I've been wanting to do this interview for FOREVER! See, Julie decided to do NaNo last year and well, the rest is...simply...inspirational. :) 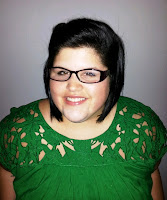 So welcome Julie Murphy to the blog! Her novel, SIDE EFFECTS MAY VARY, comes in 2014 from HarperCollins/Balzer + Bray. For more info check out her website, and her twitter!

Tell us a little about SIDE EFFECTS MAY VARY:

First off, HI, CUPID!!! I’m so excited to be stopping by the blog!

Here’s the tagline for SEMV: When sixteen-year-old former ballerina, Alice, learned she was terminally ill she made a list of things to do and people to ruin––all her scores were settled, until she went into remission.

I can’t say much else for now, but I will say that there’s a boy. His name is Harvey. And I may be in love with him.

How long have you been writing?

Do you ever watch those shows like American Idol and the people on the show are like, “OMG. I’ve been singing my entire life.” When I hear that, I think, “Well, no, actually you haven’t. I mean, there was a time when you couldn’t talk and people had to beg you not to cry during a family photo, so no, hopeful starlet, you have not been singing for your entire life.” BUT I get what those people mean. There’s always been a tune for them, even when they didn’t know what it was. And that’s how stories were for me—they were always there. Seriously, I am a devout seeker of truth, but I’ve always been a terrific liar. I’m sure somewhere in my parents’ garage, you could find a notebook full of horribly angsty poetry from Julie: The Teenage Years, but I didn’t begin to take writing seriously until 2011-ish. Side Effects was my second completed manuscript.

When did you write SIDE EFFECTS MAY VARY and how long did it take?

Well, SEMV was my NaNo book last November. I hit my 50k at about three weeks in, and then took a few weeks off and finished the manuscript in December. I’m a strong supporter of NaNo. It forces you to sit down and write the dang thing.  And, of course, there’s the community and accountability that comes with it.

Did you have any struggles? If yes, how did you get through them?

Am I excited for the next season of Downton Abbey to air in the US? (Answer: DUH! YES! DUH!) The struggles were constant. There were 57 word days. But then there were also 9k word days. I had to get past my doubts and just write. I had to stop wasting hours slaving over character names and the stupid stuff we let ourselves get caught up in.  My real struggle, though, came after NaNo. I had no clue how to end my book and I was so scared that my book would just sit there forever unfinished. I had a WAY crazy idea for an ending and I knew it might not sit right with a lot of people. Even when I told my trusty alpha reader about it, she wasn’t so sure. But then she told me to write it because, really, what’s the harm in that? If it was wrong that was okay. That’s what revisions were for.

What part of writing this novel was your favorite?

The day I saw the sun rise. I had to be at work in a matter of hours, but I’d written through the whole night and had gotten so swept up in the story that it stopped mattering if agents or editors or readers wanted my book because I loved it.

How did you know when SIDE EFFECTS MAY VARY was complete and it was time to find an agent?

Well, with my first manuscript, I never revised it much and I sort of just dumped it into a whole bunch of agents’ inboxes and said, “PICK ME!” With as much as I loved SEMV, I couldn’t let it suffer the same fate. I’d gotten hooked up with a few critique partners and was about 75% of the way through my revision when YOU announced a contest on your blog for the month of February. (Disclaimer: DON’T DO THIS.) Even though I wasn’t quite done with the revision, I entered the contest, then hustled like crazy to finish my revision before I made it to the agent round. Around that time, I also began to query.

How did you find your agent?

My agent and I had our fateful meet-cute in the slush pile. She requested. I sent. Four days later, she asked for a phone call. I guess all that sounds simple, but there was plenty of rejection before that moment—especially since I’d already queried something else.

Did you ever enter in any contests?

FOR SURE! Contests gave me more than just requests. Contests gave me community and support. The experiences I was given here on your blog and on Miss Snark’s First Victim were invaluable. (I entered other contests as well, but the names escape me!)

Do you have any advice for writers when it comes to choosing the best agent for your work?

YES. There’s no such thing as a dream agent. Maybe after time spent working together it will turn out that you and your agent are a match made in heaven, but there’s no way for you to know that until you’ve spent time working together. When you get to that oh-so-awesome stage where you get to talk to an agent, remember that the perfect agent will not only love your book, but be able to articulate why. Once your book goes on submission, it’s out of your hands, so you want to know that the person speaking on your behalf knows what they’re talking about.

Tell us a little about how you found your publisher:

Alas, this is something I can’t claim credit for since my agent did all the leg work. I will say that I was VERY excited about seeing my editor’s name on our list. She was always someone I’d wanted to work with if I was fortunate enough to have the opportunity.

What part of this whole process has surprised you the most?

If you could go back and do anything different, what would it be?

Is it obnoxious of me to say nothing? Every mistake I made, I learned from. I probably should have never queried that first book, but my querying experience would have never gone so smoothly the second time.

Okay, well, actually there was one thing. I misspelled my own title in the first four queries I sent out for Side Effects May Vary. So, yeah. That was embarrassing.

Did you do NaNoWriMo this year? Can you tell us what you're working on now? :)

Did I DO NaNo? Not really. Did I SIGN UP for NaNo? YES. As I type this, my word count is 14,122 words and I’m cutting about 9k. I hadn’t planned on signing up; I blame peer pressure. In my defense, I did have my first big revision due this month. Unfortunately, I can’t share any specifics about my current project, but I can tell you that I know my character’s favorite shade of lipstick. (Obviously, things are getting serious.)

I had SO much fun with this interview! Thank you so much for having me and if any of y’all have any questions, leave a comment. I’ll try to pop back in and reply.

Now doesn't that make you want to go finish your NaNo? YES!!!! Good luck everyone! And thanks for stopping by!