Yep! The day is finally here! The Pitch Wars picks are up on the YA Misfits blog now! Mine is #21, ETERNAL EMBRACE! You have to check it out! Go #TeamKickButt!!

It's a YA historical romance and made of 150% AWESOME! Really, I loved it that much! It reminds me of Tristan and Isolde meets Romeo and Juliet, which I also love! Who doesn't? And it's based on this real-life Neolithic burial. Which just adds that much more feeling to the story. 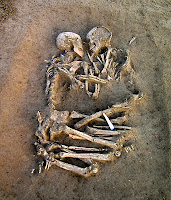 Here is the query I read during the Pitch Wars selection period:

Her Papa's flock is dead, and his fields will not sustain their family for another winter. Umenula, the daughter of a herdless herder, must make a choice to save her family from starving: bind herself in marriage, or go into a life of service before the Goddess.

When an old trader comes to her village and barters for her hand, Ume thinks she is intended for his son: quiet, strong Amoparo. But the bargain is actually for Amoparo’s older brother, a boorish man who hunts not for food, but for sport. After leaving everything she’s ever known behind, tragedy strikes on the journey to her new home. Amoparo's father is killed, and Ume is gravely injured. During her recovery, she comes to love Amoparo, and soon finds out he feels the same way.

Except the Goddess has other plans. Amoparo is also betrothed—to the daughter of the most powerful man in the village. And they will not let go of Amoparo's flocks and land without a fight. Ume and Amoparo must decide between the lives made for them, or a life they make for themselves, together.

In 2007, archeologists discovered a rare Neolithic double burial near Verona, Italy—the town where Shakespeare set his famed star-crossed lovers, Romeo and Juliet. The bones of a young man and woman were found in the same grave, embracing each other, as they had been for over six thousand years. Such a burial had never been seen before. ETERNAL EMBRACE, a 75,000-word historical young adult novel, is their story.

Totally my cup of tea! And the manuscript only amazed me more! Amoparo? *swoon*

To read more about this amazing story, check out the author's blog. She's been posting all kinds of interesting things about writing it.

Also, YOU MUST check out my two alternates!! They're also pretty fab-freaking-tastic! All the love!